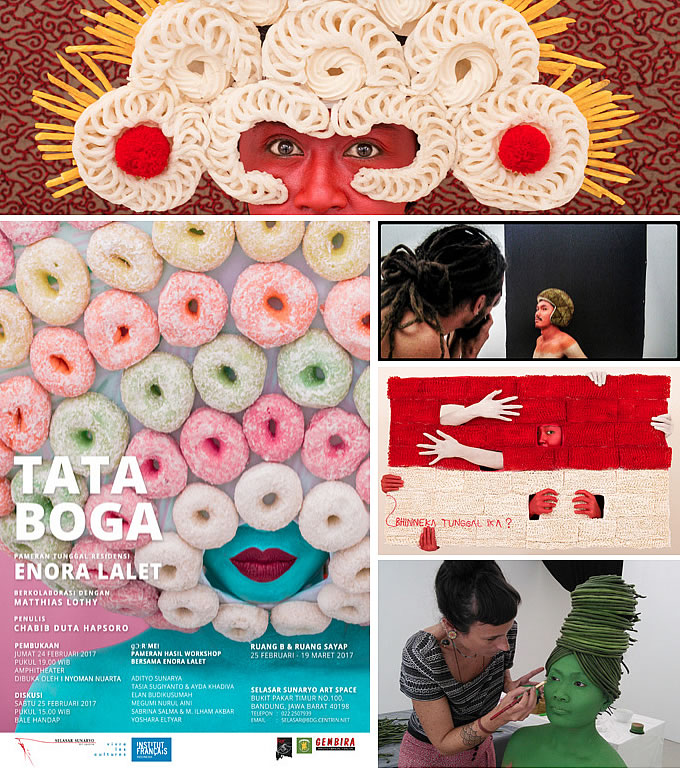 Enora Lalet is a food visual artist. Flavours make you travel, travelling is also a great part of her work. Because her parents had fallen in love with Indonesia, she followed them there as a young child. She has been to India, Thailand, Cambodia, Indonesia, and she has also visited big cities like New-York, Berlin, London or Madrid. That’s why the mixture of cultures and subjects always appear in her displayed pieces of work.

After a master degree in Arts and a degree in Anthropology, she exhibited her culinary portraits in Bordeaux (2010), introducing her series of cooked pictures, Cooking Faces. “Pop icons, glorifying food and earth, the question could be: are we what we eat? Her off-the-chain portraits, flesh and sauce, lips and coulis, colour and optical brilliance, exquisite pheromones, are ad libitum variations which ensnare and chain the senses.”

O.M Food being now her favourite material, she has taken part in the making of cookery books for social associations in favour of children and also in gastronomy festivals in France. Today she makes international art residences (New Delhi, 2015 and Java, 2017) where traditional skills, the body and the gastronomy intertwine in alive sour pictures.