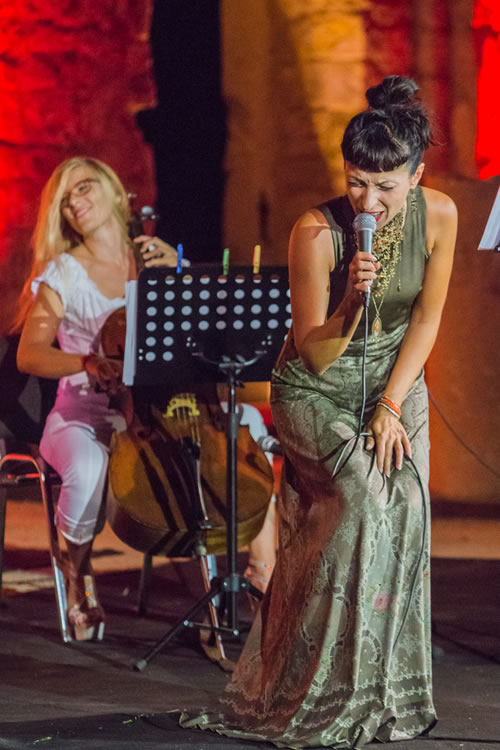 This year, Ines Trickovic gathered the cream of Croatian jazz and classical music – Goran Končar, violinist, Zvjezdan Ružić, pianist and Ljerka Končar Gamulin, cello player with her vocals. This fantastic quartet started the Homage to Erik Satie project, a combination of classical music and jazz where Ines wrote all the poetry on Satie’s music. In this project she’s in the double role, as author and performer, and for the first time in the history opus Gnossienne and Gymnopedie of Erik Satie become songs for singing.

Born in 1982 in Dubrovnik. Her musical journey began in an unconventional way. Growing up in the war-torn city ,this self thought singer, learned music and jazz by listening to Chet Baker, Miles Davis, John Coltrane, Tom Jobim, Ellu Fitzgerald, and Billie Holiday.
Without a day of music school, she has become one of the most admired jazz singers in Croatia and abroad. She has performed in over 3000 concerts so far and has collaborated with Jaar Saari, Aaron Goldberg, Mikael Jacobsson, Gilad Hekselman, Marcus Gilmore, Julian Shore, Brian Girley, Kruno Levacic, Edd Lo, Luka Zuzic, Eddie Luis, The Jewsers, Detour, Mariom Igrecom and many others.

With its sequel, she released the album “Runjic in Blue”, which was declared as one of the most up-to-date jazz vocal albums ever recorded in Croatia, and in 2014 she was awarded the highest Croatian music award “Porin” for the best jazz performance of the year.

In May 2014, participated as the first Croatian jazz artist in the prestigious jazz concert cycle “All Souls At Sundown” in the unitary church in Manhattan, New York, accompanied by renowned jazz pianist Aaron Goldberg.

In April 2015, recorded a new album in New York “Tales of the quiet lands and other stories” in collaboration with: Brian Girley, Julian Shore, Gilad Hekselman, Shin Sakaino and Kolja Gjoni.

On April 6, 2016, she performed as a headliner with a concert “Ines Trickovic & Friends” in the prestigious Carnegie Hall Hall in New York where she performed with some of the most famous jazz musicians of today, as the legendary jazz drummer Marcus Gilmore and guitarists Gilad Hekselman.

Read:
… You can never ignore her warm and enchanting voice. The eclectic genius has never had traditional music education, but relies on its own strength. Today, Ines is considered one of the greatest jazz singers. She is far more than just a talented singer and songwriter, swimming in many different styles like cabaret, comedy, jazz and theater. Beishan International Jazz Music Festival 2013

… Ines is a born singer and band leader. You can feel her strong instinct and music in the first minutes of her performance. When you hear it, you do not doubt that she is unique. – Zoran Staji, music critic. Zagreb 2013.

Ines Trickovic is full of personality and multidimensional charm.
She is a warm and dramatic performer, with love for jazz classics and Brazilian music. –Aaron Goldberg

In her career of singing with many singers, singers, Ines is unique. She has a God given sense of rhythm, immaculate intonation and the ability to emotionally capture the audience. That, combined with her lyrical soprano full of emotions, explains why I said the unique “at the very beginning. – Joe Pandur

Goran Konar, one of the most prominent Croatian violinists, studied at the Music Academy in Zagreb at Martino Baric and Josip Klime and graduated in 1978 in Leonid Kogan’s class at the Tchaikovsky Conservatory in Moscow. He graduated from Max Rostal in Bern and Henry Serynga in Geneva, then at Yfrah Neamana in London, whose assistant was from 1981 to 83 at the Guildhall School of Music.
Since 1988, she has been a professor at the Zagreb Academy of Music. Hold master classes in Madrid, Berlin, Turin, Milan, Sidney, Tokyo, Beijing, Stellenbosch and elsewhere. In 2004 she started LAUS Summer Academy in Dubrovnik together with the greatest violinist names in the world (Zakhar Bron, Viktor Tretyakov, Dmitry Sitkovetsky, Leonid Sorokow).
His international solo career began in 1982, visiting most European countries, USA, Japan, Korea and Israel.
From 1984 to 1994 he was the concertmaster of the Royal Philharmonic Orchestra in London, the Croatian Radio and Television Symphony Orchestra and the Zagreb Philharmonic Orchestra. He has worked with renowned orchestras and conductors all over the world.
He won first and special prizes at national competitions in the country, Musical Life in Moscow (1980) for the performance of the Concert for Violin and Orchestra Dmitry Šostakovi, the First Prize at the Bratislava International Concert in 1984 and other high prizes. The prize list is particularly emphasized by the award Vladimir Nazor (2006).
In his solo and pedagogical practice, he was especially dedicated to the interpretations of Johann Sebastian Bach’s work (Solo Sonatas and Bands), then a repertoire that worked with Max Rostal (WAMozart and the French repertoire – M. Ravel, C. Debussy and C. Franck) Yfrahom Neaman (JS Bach, M. Bruch, E. Bloch, F. Mendelssohn) and Leonid Kogan (Russian literature – PIČajkovski, A. Glazunov, A. Haaturjan, S. Prokofiev and D. Šostakovič for the performance of which he was the first foreigner who won the Russian prize).
Special attention is given to the performances of the 20th century classics (B. Bartok, B. Martino, S. Gubajdulina, A. Nilsson, K. Goldmark) and contemporary works, which is why a number of composers devote themselves to compositions (Boris Papandopulo, Milko Kelemen, Giuseppe Gavazza Holloway, Ivo Malec).
His first album was released by EMI 1984 in London, and recorded for BBC, CBS, France Musique, HRT and other radio and television stations. Croatia Records has released one of the few integral performances of solo violin sonata Eugene Ysaÿea.
Since 1987 until 2012, the Zagreb Quartet has been conducting its entire arts and crafts for over a quarter of a century, and has been built into the existence of this most long-lasting, not only Croatian, but also European Chamber Orchestras.

Pianist, arranger and composer was born on June 21, 1988 in Rijeka. He graduated jazz piano at the Kärntner Landeskonservatorium in Austria in the class of Prof. Goods Bargada (USA). He attended jazz seminars by pianist Emil Spanyi and attended regular classes with private watches at the world’s pianist David Gazarov. Since 2009 he is a permanent member of jazz band Jazziana Croatica. The ensemble has so far recorded four studio albums – of which three are awarded with the most prestigious Croatian record label Porin. In 2015, he released his first solo album “The Knightingale Cabaret” – a project that brings together jazz musicians from Croatia and Slovenia; Lenart Krei, Vojkan Joci, Tomaž Gajšt, Luka Veselinovi
, Adriano Bernobić and Alba Nacinovich. The album is made up of six compositions in which Ružić combines the elements of American jazz that he studied with traditional Croatian melodies and cultural heritage from the clime he grew up.
In 2007 he performed with the Rijeka Rivers group at the jazz festival in the UK. He has performed with Jazziana Croatica in several countries, from which he has to perform at the Schoenberg Hall at UCLA University in California, performances at jazz festivals in Munich, Budapest, Paris, Milan and other European cities.

He is the winner of the Professional Awards awarded by the Croatian Music Union; The 2010 winner is in the category “Young hopes of jazz”. 2011, 2012 and 2013 won the Status Award in the category “Jazz Piano”. In 2016 he became a member of the Croatian Community of Independent Artists.
In 2018 he was awarded the Porin Prize for Best Jazz Album of the Year.

Born in 1986 in Split. Grew up in the family of famous musicians.
She is the winner of many awards at national and international youth cello competitions. She has performed in prestigious halls in Salzburg, London, Paris, Brussels, Italy, Malta and Lithuania.
Has also participated in the project Goran Konar & Darko Jurković jazz quartet from which the CD ‘Meeting point’ was recorded.