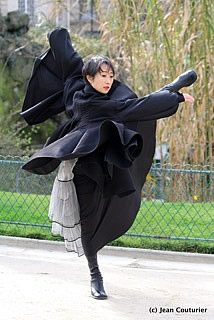 Kaori completed her classical training in Singapore ( Royal Academy of Dance method) and in Japan at the Tokyo Ballet school and with Saboro Yokose.

From 1989 to 1996, she worked in Japan as a soloist performing classical repertoire and collaborating with various Japanese choreographers, as well as teaching ballet.

Since 1997, she has lived in Paris and has worked with: Matthew Hawkins at the Royal Ballet, London in “Angle and Exile” (back stage project), Carlotta Ikeda in “Rite of Spring” (buto), Karry Kamal Karry in “Siamois” and Jacky Auvray in “parenthèse” and “d’x”, Philippe Dormoy and Valerie Jolly’s “Silence” (musical theatre), Cie Remue et Ménage (street theatre), “On Air” (contemporary dance collaboration with the post rock band “Guns of Brixton”).

Emir Kusturica’s “le temps des gitans”, an opera/rock adaptation of his film, an acrobatic duet intended to bring a surrealist element to the drama.

Together with Sébastien Vuillot, she founded the company Tsurukam and has participated in the elaboration… and performance all of the companies pieces.