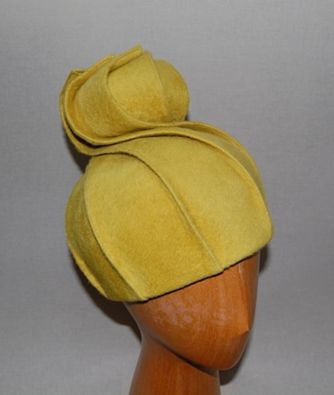 She is a creator of one of a kind hats, as they are like a sculpture of fabric, leather, fur, feather…
Mayumi Takeguchi had been working as the decorator for many years. As she was a hat lover herself, she decided to study in Paris atelier, then returned to Tokyo to open her studio, and works alone to create the sculpture by fabric, leather and fur, feather, every material she finds.

Since the beginning of her activity, Mayumi Takeguchi always has interest in water, the rivers, and especially the way how it flows. Her first collection was made with the theme « Jeux d’eaux », The Play of Water, coming from the title of the music of Ravel.

Mayumi Takeguchi is based in Tokyo, but had participated in many international hats contests, and received many prizes as Prize Hermes, J.P. Gaultier in France, and Borsalino in Italy, Growing hats in the Netherlands, or Biennale International at St Etienne in France.

In 2017, her successful exhibition in Paris brings her to the other possibilities in France,
In this year she has some other shows in Paris.

We show at this exhibition in Dubrovnik, her works of the pleat series, mainly in fabric pleats, seem like objects when they are put on the table, but they are all to wear as hats.
We wanted to show you the possibility of creation from fabric, to make some objects, sculptures.

We expose at this exhibition in Dubrovnik, her works of the pleat series, mainly in fabric pleats… They look like objects or sculptors when they are put on the table, but they are all hats ready to wear. The beauty of a woman is not in her face or body, but true beauty in a Woman is reflected in her heart and her hut.