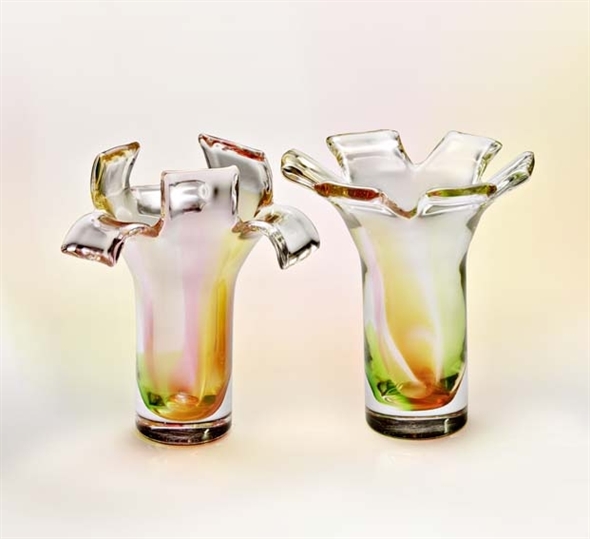 Hard and granular, oily soft or smooth as a mirror. Jelena Popadic wants to exploit these characteristics of glass completely. She is passionate and ruthless when using the sandblast with which she lashes or gently strokes the surfaces of her objects at will. She transforms clear glass into subdued objects which become very different in their outward appearance.

Jelena is an active member of the Association of Dutch Designers, Friends of Modern Glass, The National Association for Visual Artists, Mediamatic and Capital D. In 1991, Jelena won the First Design prize (from 350 graduated students from art and design schools in the Netherlands): Start ’91 Karel Aalbers Design prijs (Centraal Beheer Holding NV). She founded the association ‘Glassmovement.nl’ – an association of artists, who work and live in the Netherlands and organised an exhibition in Gemeentearchief Amsterdam. Jelena also get involved in activities in the fields of culture and education. Between 1991 and 2013, she has been supervising and realizing stage stenography for various dance theatre and opera productions via Companions and Showtex. Between 1991 and today, she has been collaborating, designing and producing Interior decorations in the fields of Art, Culture and Entertainment. Jelena also created collector’s items Oranje Vaasjes (1000 ex) for the silver anniversary of the reign of Queen Beatrix, commissioned work by Royal Leer dam and Glass Museum, Leerdam.

She works as a teacher and independent artist in the fields of visual and performing arts, participating with her work in various film, dance, theater and opera productions. Her work stands for innovation, experimenting, collaborating with other artists.

“My inspiration is from mother nature, and ancient teachings about secret geometry, esoteric, epics of creation. I am always fascinated by the translucency, visual effects and optical illusions of glass. When I am creating it feels like being plugged in to another dimension here energy and sounds are appearing in front of me creating indescribable shapes, sounds and songs. Thus shapes became a glass body and sounds and songs are coded in the service texture. I feel that glass as a material has a great memory. My pieces are containers with energy and I am just an extension cord, serving the force of creativity.”