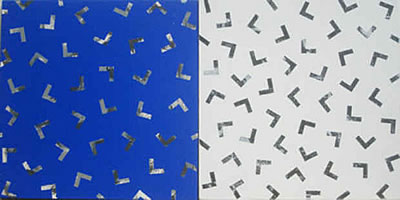 In 1968 when he came to Paris for the first time, as many young Japanese, he took a boat from Yokohama to Nahotoka, then by train he has crossed Russia. It took him two weeks to arrive at “the city of light”.

He studied at Beaux Arts de Paris, and already then he was interested in abstract painting.
His discovery in France was the Prints art (lithographies, silkscreen prints).
At this period, he realised many Silkscreen prints, always abstract but already very geometrical patterns with vivid colours.

He got a prize at International Print Contest in Zagreb.

He had been working for ten years in Paris as the assistant of great Master of the Geometrical painter, Kumi Sugai.
In 1977 he returned to live in Japan at Osaka where he works now.
Every year he does many exhibitions regularly in Japan, South Korea, China, France.
At his last exhibition in Paris, he painted the walls of the Gallery in Quartier Latin. The visitors of the expo were so delighted, and the gallery decided to keep it. So, if you go to Paris, at 11 Rue des Grands Augustins, 75006-Paris, you can see his wall painting.

Since he came back to Japan, he published one essay and three art books.
Shige Amano also teaches at Art University in Osaka and gives the conference to the art mania in the gallery or at the symposium of art.

Shige Amano has formed his unique style working in Paris, where he had an opportunity to see art which made use of complementary colours and geometrical patterns.